Media & Entertainment: Jump Starting Your Studio's Journey in the Cloud 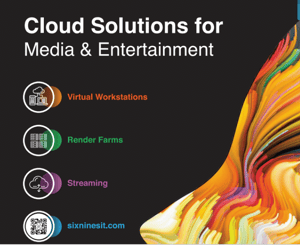 Each year the biggest names in media and entertainment converge at the AWS M&E Symposium in Los Angeles - AWS’s biggest Media & Entertainment event of the year - to address the latest innovations impacting content from creation to consumption. On June 16th, we had the pleasure of joining our partners AWS Thinkbox, Qumulo and Teradici at this year’s Symposium to showcase how studios can produce and deliver better content in less time using virtual workstations and render farms in AWS.

Many of the major studios with large budgets to support their own dedicated in-house teams are experiencing success for the content production pipeline in AWS. Thanks to collaborative efforts from partners in the ecosystem including AWS Thinkbox, Teradici, Qumulo and Six Nines to accelerate the journey, the market has now evolved to the point where smaller studios can also benefit from the speed, flexibility and power that’s only available in the cloud.

Getting a Jump Start in AWS

By combining Six Nines’ AWS-specific experience and expertise with Teradici’s PCoIP protocol and Qumulo’s high-speed distributed file system, studios of all sizes can now tap the power of AWS wherever they may be in their cloud journey. As a result, customers have the ability to provision from one to hundreds of new artist workstations or thousands of rendering cores in minutes, not days or weeks, with the ability to use existing applications like Deadline, Redshift, Maya and other content creation and editing suites. Additionally, our M&E solutions provide the geographic flexibility to access projects and content securely from studio, client site or location, along with other immediate benefits, including:

Webinar: Learn how to jump start your studio in the cloud.

Join us for a webinar featuring cloud experts from AWS, Teradici, Qumulo and Six Nines on how to get ahead of competitors and start producing better content in less time by getting started quickly in the cloud. Together, we’ll discuss how packaged "jump starts" can accelerate your adoption of cloud-based workstations and render farms.

Register today to hear real-world success stories including Next-Gen virtual artist workstations, virtual render farms and an all-in "Studio in the Cloud", as well as: