As the year comes to a close, we wanted to take the opportunity to share and reflect on some of the exciting news recently announced at AWS re:Invent – the world’s largest gathering of the global AWS community – and the developments we’re most excited about for our customers heading into 2019.

As seven-year re:Invent veterans, we’ve seen both the conference and industry grow (and eventually explode) with excitement, and this year was no exception. One of only 36 Premier-tier AWS Partners in North America – and the only one with a focus on HPC and Windows Workloads – we’re thrilled to see that AWS is continuing to enhance and improve their existing products while simultaneously releasing new technologies and services. From FSx, EFA and SFTP for S3 to growing buzz around AI/ML powered by HPC, we’re uniquely positioned to help customers discern which new offerings are the best fit for their organization.

With the combination of Hub VPC and the new EC2 “n” instance, Amazon is really stepping up their networking game. They’re working hard to distance themselves with competitors as well as remove disparities between on-premises and cloud workloads for even the most demanding applications.

Additionally, AWS announced its new Well Architected Partner Program and Tool, of which Six Nines is proud to be one of a select number of early launch partners.

Trendspotting at re:Invent -- AI/ML and HPC

Two of the most buzzworthy topics at this year’s re:Invent were Artificial Intelligence (AI) / Machine Learning (ML) and High Performance Computing (HPC), which fall directly in line with Six Nines’ core expertise, custom HPC solutions and offerings. There was a level of enthusiasm and focus around HPC that we’ve not seen before, specifically related to HPC powering AI/ML. We’re also excited to see AWS growing their focus on Windows Workloads as well as serverless and serverless applications. Looking ahead to 2019, it’s clear that AI/ML will only get bigger as AWS continues to add more quivers to its arrows with its HPC product updates and announcements.

Thanks to all of our customers, friends and partners for joining our annual pre-re:Play get-together at Lagasse's Stadium!

Six Nines achieved Premier-tier status this year, becoming one of only 36 elite level partners in all of North America.

Our founder and CEO, Jason Cutrer, was interviewed and featured in Geekwire’s re:Invent recap video, along with leading AI/ML and HPC industry experts and executives from Intel and AWS. 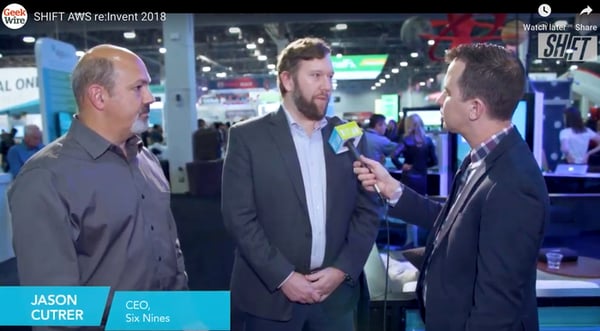