Cloud is blowing up. Every organization, big and small, is looking at the cloud to increase agility, reduce IT spend and increase uptime. That’s all peachy, but why does adoption slow down after the first few months for many companies. Adoption typically follows an S-curve where initial adoption is quick and then it quickly falls off. The problem is: 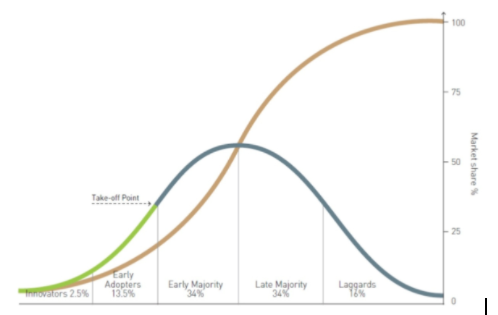 1: During the downturn in adoption time; cost savings are lost.

2: Many companies can’t pull out of the curve once momentum is lost.

What’s wrong w/ a transformation stall? Delaying your transformation can impact cost savings and delay delivery of real value. Meanwhile, you are still investing in cloud consultants and overhead costs.

To avoid a major adoption fall-off, you will want to follow the Cloud Adoption Framework published by AWS.

If you are following the Cloud Adoption Framework, you should have already:

Congratulations, you are well on your way to a full Cloud Transformation. Wait.. what? Cloud Adoption is slowing down? Why? Cloud is awesome! We told everyone how awesome it is.. What don’t they understand?

So, if a company does all these things right, why does adoption fall off? According to Eric Tachibana with AWS Professional Services, the real problem is Change Management. Change is hard. There is a framework called Crossing the Chasm by Geoffrey A. Moore that is all about how consumer products are sold in mass markets.

The important idea here is that the S-curve is a natural law of markets. Adoption quickly grows, then it drops off only to bounce back. Like an S. Typically driving that S-curve of adoption is a bell curve of buyers (or users). The initial spike of the S-Curve is due to Early Adopters, after that drops off, the second jump in the S-curve is from the Early Majority. The Early Majority and Late Majority is where the largest group of users actually live. The adoption falloff is actually the dip between the early adopters and the early majority. That is called The Chasm. The reason for the chasm is caused is because the two groups of users adopt the cloud for different reasons. The early adopters are looking for disruption to push change. The early majority are truly looking for the status quo. They want white papers and proof that the product is mature. There is a misalignment between the two buyers. Cloud users behave in exactly the same way as buyers. The Chasm is the same for this identical behavior.

Here are 9 ideas that will help you cross the Chasm (adoption slowdown):

Contact Six Nines IT so we can help you with your Cloud Adoption.